Foreign Language students at Lake Shore High School traveled back in time, circa the 18th century, at Old Fort Niagara. Students visited the fort in Youngstown, NY, for French Heritage Day, a celebration of the abundant French history and culture found in the fort and its history. Originally a trading outpost for the popular (and very valuable) furs, France built the “French Castle” in 1726 as a fortification against the British and Native American forces in the Seven Years’ War. The British successfully took the fort in 1759 during the Battle of Fort Niagara. Students spent the day participating in interactive activities and experienced a day in the life of a French soldier, including drill commands, firing a canon, and learning about trades such as blacksmithing from “the locals,” while considering how different life and language may be in Western New York if the fort had remained under French control. 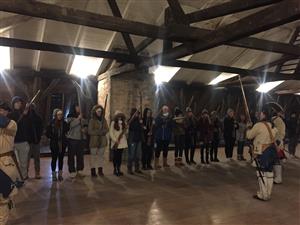